It has been over a year since our last post.  Ooops, sorry internet.  But we have lots of excuses, I promise.  Oh, and brace yourself… this is a long post.

First of all, in August of 2017 we felt a bump on Iris’s head above her ear so we consulted the internet.  They said to monitor it to see if it goes away or gets any bigger for about 2 months and if it is still there contact your pediatrician.  So, early November rolls around and her bump is still there so we made an appointment with our doctor.  He felt it and referred us immediately to a neurosurgeon which scared the crap out of us… he assured us it was probably just a dermoid cyst which isn’t anything to worry about but it will need to be removed.

As parents, this was terrifying because what if it wasn’t a dermoid cyst?  What if it was something worse?  We were scheduled to meet with the neurosurgeon in Ann Arbor in January- which is a partial reason why we stopped posting.  Another reason was because after some time and tremendous thought, we decided to start the process of uprooting from Gladwin and relocating in Southwest Michigan (where I- Jo- grew up).

In January of 2018, we listed our house for sale.  I tend to lean towards pessimistic expectations when it comes to things like predicting weather, getting our car repaired, or selling a house.  I thought it would take us years to sell our house but after about a month on the market we had an accepted offer in place which was terrifying.

Meanwhile, our neurosurgeon told us she thinks its a dermoid cyst but they would need to perform an MRI on Iris, which means they would have to put her out for the procedure since she will need to hold still for so long.   At our follow up appointment we learned that it was indeed a dermoid cyst and a simple outpatient procedure would take care of it.  We had it scheduled for February but our house was riddled with such a nasty stomach bug we had to postpone to the earliest possible time; June.

We managed to work out in closing of our house to wait til the end of May so I could finish up the school year and just like that we had closed on our first house.  But the problem was- where were we going to live?  We had quite the nervous panic trying to find somewhere to go especially because it may have been a temporary move.

I had started applying for positions in Southwest Michigan and began receiving interviews but I didn’t know if I would find the right match or not.  I didn’t want to just jump on the first opportunity if it didn’t feel right and leave the great job I already had.  We ended up finding a temporary rental from someone who bought our couch that opened up about 3 days after we needed to be out of our house.

So Eric and Kenpa (Eric’s dad) moved all of our belongings into a storage locker, we waited for three days until our rental was ready and then we moved everything from the storage locker into the “new” house.  Then I had two more days left of school and voila!  It was summer time.

About mid June, I found the perfect position.  I was offered the job (wohoo!) and I gladly accepted which opened a new can of worms.  Where were we going to live?  My parents gladly offered their basement but we wanted to use that as a last case resort.  Rent in that area was double the cost compared to Gladwin with less space so we started to panic a little.

Eric and I decided to randomly look at houses to buy and the weirdest thing happened.  As we were navigating to a house that was in our price range, we drove by a for sale sign of a house that looked a little beat up.   I quickly turned around in someone’s driveway and as we did that a fox crossed the road (that is the animal that Eric and I geek over) and we pulled in the driveway.  The house sat on the top of a hill overlooking a very pretty wooded yard on one side and a horse farm on the other. 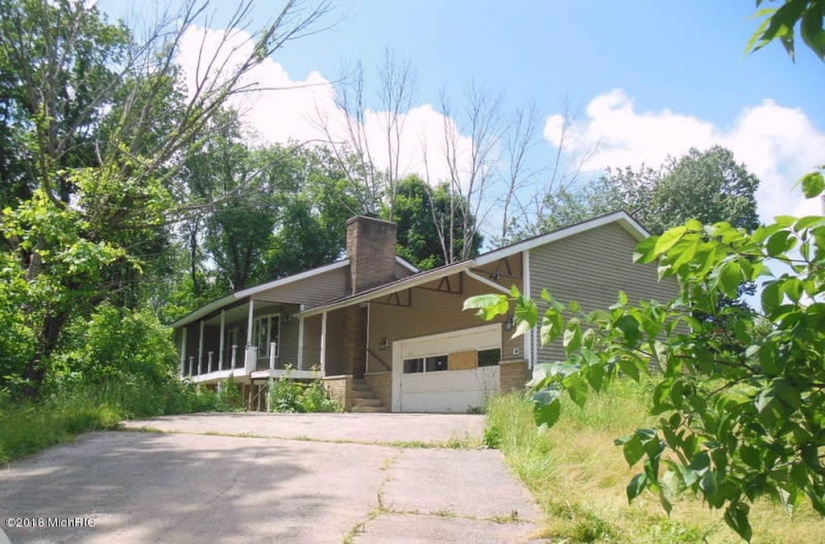 In these situations, by brain goes into over excitement mode.  Like- oh we can paint the door blue and add plants and landscaping here… and then I have to calm down and tell myself that we probably won’t get this house so don’t get your hopes up.  We quickly drove to get my parents and took them over.  We awkwardly peered through the windows (the house was foreclosed so no one was there) and I somewhat fell in love.  Eric found the listing and it was in our range and it is a decent size with a guest bedroom so we can actually have visitors!

Sadly, Eric, Iris and I were headed back to Gladwin that day but I have seen way to many episodes of Property Brothers to know that when you find a property like that you need to jump on it.  I called the realtor and we found out that all offers were due the next morning.  Since we were already headed back, my dad toured the house and told us its condition and strangely enough (especially with all the other houses on the market and the rentals) we made an offer without actually stepping foot inside the house.  Terrifying.  But we trust my dad to guide us, so let’s jump on it!

Apparently many offers were placed on the house that were above the asking price, and we were below but we were offering in all cash.  I knew we lost it, but to our surprise the bank liked our offer the best and it was accepted.  Can you say lucky?  I mean it was crazy how it worked out.  Goosebumps!

After the offer was accepted it was officially surgery time.  Eric, Iris, and I went in to the hospital to get her dermoid removed.  What a scary experience.  It was supposed to be easy- out patient, but again my anxious parent pessimistic brain kept reminding me of everything that could go wrong… after all- I did see a few seasons of Grey’s Anatomy.

About an hour later we were called back into recovery where a very grumpy and groggy miss Iris was.  We were so relieved to see she was ok, we were definitely very lucky our baby girl did so well.

Back to Gladwin to start packing everything back up, for another giant move.  Which would be move number 3 if you are keeping track.  We closed on our “new new” house (what Iris calls our house, not to be confused with our “new” house) at the end of July and Eric and I began the great move.  It took 2 moving trucks even after filtering through and selling off our unwanted things.

Grandma Mel and Grandpa Ken watched Iris for a week so we could get our house livable… literally.   The electricity and water was off and it took over a week to get the electric on.  And no internet (poor Eric).  Actually we didn’t get internet until well into September so it was a rough few months.  This is what 95% of the house looked like the first few weeks:

Since we were fixing/installing things as we moved in, our house was a complete disaster for such a long time.  But since Iris was making such a big adjustment I wanted her to be comfortable and excited about her new space so I painted her room that used to look like this:

Yes the room was painted to look like a castle.  I hated it.  So did Iris.  She declared she wanted a pink room so while we were rushing to get the house livable- I redid her space.  Crazy enough I only have a in progress photo of her room… I will someday take more pictures and post them because even though I was super anti- pink walls, it turned out super cute. 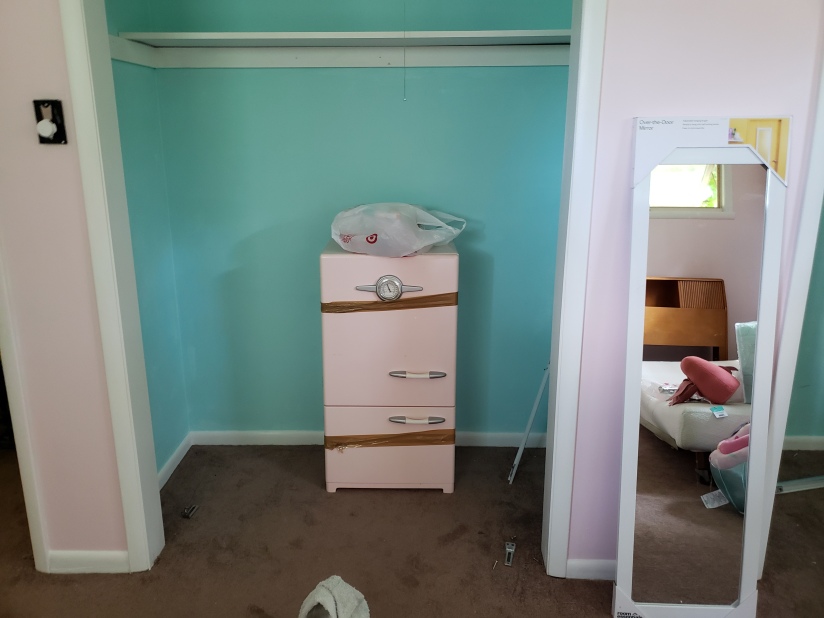 Then, I had two classrooms and a master’s class to finish.  Somehow I ended up with a 4.0 that semester which is insane to me.  Wohoo!  But of course when you least expect it, things go awry.  Our first baby Phoebe tore her ACL and needed a very expensive surgery.  Poor girl.  We got her fixed up but she was crated for around 2 months. 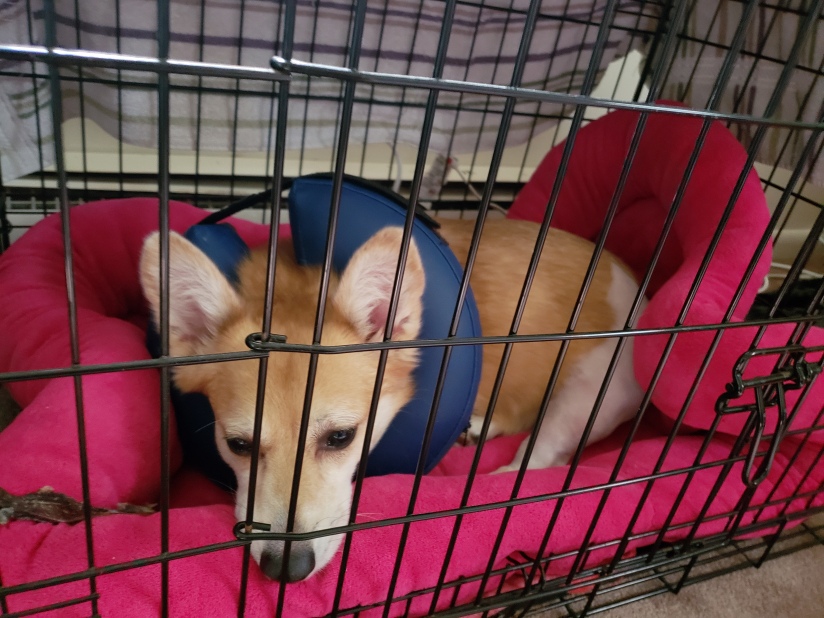 Then just like that, the school year had begun in a new school and my baby started her first year of preschool.  SHE IS SO OLD!

Ok so lets hit the fast forward button here… we have done a ton of things to the house since.  My dad is over all the time working for us (thanks dad!) and my mom has taught Iris to like salad amongst other things.  We got and installed new windows (by the way, whenever I say “we” I mean Eric and my dad, I am capable but normally at school while this is happening), updated a bathroom, took lots of giant dead trees down, demolished another bathroom, fixing the office up, and updating things like ventilation and what not.

This site was meant motivate Eric and I artistically, and we have been so busy that although the site has been neglected- I think we made the right choice not to stress over updating.  Hopefully we start back up soon though it may not be art projects we update over- most likely something along the lines of home improvement since we have a lot of home to improve upon.

Anyways, I leave you with my new mantra: 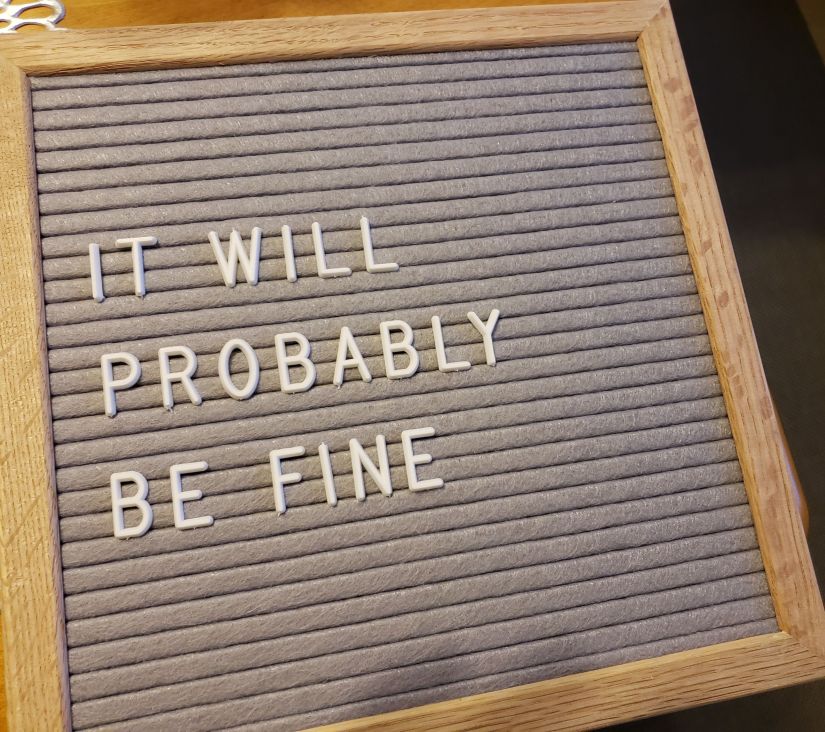 Yep.  I finally got a letter board and its awesome.  Thanks primeday!  Also, when you have such an inspiring quote like this one there is no point in changing it.  Especially because we ended the year with a dead car battery and a dog who ate a bunch of fudge.  Happy New Year to all!

Well howdy (internet) neighbor! We are Jelly 'N' Eggs- or Jo and Eric, a husband and wife artistic team. Our designs are a lot like eggs and jelly, a random combination that has some interesting results. We find ourselves creating a blog to share our interesting journey tackling projects, parenting, and living, from a unique and humorous perspective. So, sit back- grab a drink of your choice, and enjoy tales from Jelly 'N' Eggs. View all posts by jellyneggs

1 thought on “The year that got away…”